Dog Bites: What is the liability in Texas when dogs attack?

Look, I am going to get this out first right now:  I love dogs.  The two I have are family.  Most of the time a dog that bites is just being a dog and it is not the dogs fault.  That said, it is often the owner that is the problem.  That's where I come in. 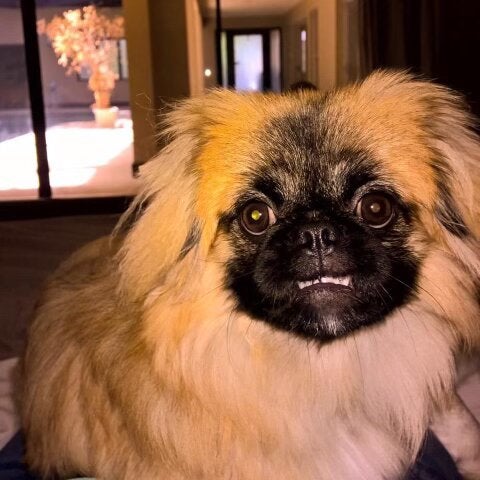 This is LuLu. She bit the shit out of me the other day.

The other day, my dog LuLu bit the shit out of me.  Right on my hand.  She drew a little, tiny, bit of blood this time.  I would love to say it was the first time but she has done it before.  Is she aggressive?  Hell yes she is.  Highly.  She is aggressive to other dogs and humans and birds, and things on the t.v., the ceiling fan sometimes and the sound of the shower.  My neighbors have affectionally nicknamed her “switchblade” as they have walked past our house and felt the cold, hundred yard gaze of an animal that's leg starts to shake in anticipation of administering certain death.  I basically have to keep her contained in the house, and even then, in certain areas.  “Are you worried about her being around your 5 year old son?”  Of course.  She has bit the shit out of him too.  Right on the leg.  It didn't do much but it certainly kept him from trying to tackle her.  Oh, I should mention she is a Pekingese.  About 10 lbs of hate wrapped up in a delightful, aristocratic puff ball.  Also, every time she has bit me, it has been a warning shot.  And I was taking something from her, usually food she has stolen from the pantry or from the table.

My point is, that LuLu has some flaws, but she is not mean spirited.  She probably has attacked me, at most, I would say a dozen times in the last few months.  Does that mean she is a vicious animal?  Probably.  But her abuse and contempt for me and my family has created a bond so strong, that, and I mean this, I would commit felonies to keep someone from hurting her.  She is the best dog I have ever had full stop.  If I could clone her I would.

But what if LuLu bit a guest that came over to my house?  Would I be liable?  I would like to think not because I have never seen Lu Lu bite someone or something that didn't fully deserve it in some way.  But that isn't always the case, and it certainly isn't the law.

Texas is unique in that it does not have a civil statute that specifically lays out a dog owner's civil liability for injuries or damages caused by their dog's behavior.  And when we I mention injuries, I'm not only talking about a bite.  I have had cases in the past where a dog attacked a person by knocking them to the ground, shattering their leg.  I have two past cases where a dog knocked a rider off their bicycle and caused significant injuries.

In 1974, the Texas Supreme Court issued an opinion that is not commonly referred to as the "one bite rule".  Essentially, a owner that does not have any notice that their dog would bite anyone has a defense if one day that dog bites someone.  But that defense is only available once.  After the owner is made aware of their dog biting someone, just once, they can be liable if that dog bites someone again due to the owner's negligence.

All of this means that in a typical Texas dog bite claim, the injured person usually must show that:

There are other ways for dogs to hurt others than just simply biting them of course.  For example, if a large dog jumps on a person, knocking them to the ground and causing a broken wrist, the injured person may bring a lawsuit against the dog's owner. Again, the injured person will have to show either that the dog's owner knew the dog was aggressive or that the owner failed to use reasonable care to prevent the dog from harming others.

In certain dog bite cases, the animal's owner could face criminal charges as well as civil liability.  Texas Health and Safety Code 822.005 lays out the elements for a felony offense if:

3:  Do I have any defenses to a dog bite claim?

In response to a dog bite lawsuit brought in the state's courts, a dog owner in Texas might, among other potential defenses:

Because most Texas dog bite claims require the injured person to show that the owner knew the dog was aggressive, evidence that the owner had no knowledge of (and had no reason to suspect) the dog's potential viciousness might work as a defense to a dog bite claim, especially where the owner was not otherwise acting negligently in controlling the dog.

Further, if the injured person was trespassing on the dog owner's property when the bite occurred, the owner could successfully argue that the person who was bitten bears some or all of the fault for what happened.

As for me, I am probably not going to have any of these defenses when it comes to LuLu.  Hopefully though, she will temper her thirst for flesh and bone.  She really is a good dog.