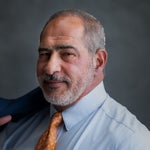 Joseph Malouf has lived in Texas all his life. He attended the University of Texas at Austin, where he played football and attended pharmacy school.  While in pharmacy school, Joseph was class president, dean's board member, and president of the Longhorn Pharmaceutical Association.  Joseph graduated from the University of Texas College of Pharmacy in 1984.  During his tenure at UT, Joseph received the Sheftal Outstanding Pharmacy Student Award; The A.Ph.A. Outstanding Student Member Award; Searle Scholarly Award and Longhorn Pharmaceutical Association Leadership Award.After graduation, Joseph practiced as a pharmacist for several years before deciding to attend law school.

In 1991, Joseph graduated from Texas Tech University School of Law.  While attending Texas Tech, he was an active member of the Student Lawyers Association, the Volunteer Student Law Association, delta Theta Phi Legal Fraternity, the Board of Lawyers, and served as Vice President of Trial Defense.

In addition to practicing law, Joseph has always had a passion for sports and was once a certified NFL and NBA sports agent.  In addition to representing professional soccer and basketball players, Joseph has represented several members of the United States. Men's Olympic Gymnastics Team. His fondness for athletic competition also fuels his passion for coaching and developing young athletes.  For the past 2 decades, Joseph has coached soccer and athletics at the middle and high school levels.  He is a certified trainer who uses level 2 athletics.   His extra time was spent as a sprint, hurdles and relay coach at St. Thomas High School, where his team won the TAPPS. 5A State Track & Field Championship (2016), TAPPS 6A State Track & Field Championships (2019, 2021) and has been a state semifinalist in football (2014, 2015).

Joseph's daily reminder comes from the book of Isaiah 1:17 – "Learn to do the right thing!  Seek justice, encourage the oppressed.  He defends the cause of the Orphans, he advocates for the case of the Widow."